My heart pounded, and my hands grew clammy as I waited for her response.

“The likelihood that any of your future children would have Leigh’s Disease is 25%,” she said. “You are both recessive carriers of this gene.  There is a 1 in 70,000 chance that two people would both carry it.  However,…you do both carry it.”

With disappointment, I let out the breath I had been holding.  The genetic counselor was younger than me, clearly pregnant with her first child, and bubbling over with joy and possibility (or so I assumed).  I glanced out the window. The clouds were low and thick on the dark, gray January day, perfectly reflecting the condition of my heart.  It had been only two months since our son passed away.

I hadn’t yet grieved the loss of my son, and now I also had to grieve the loss of not having more biological children.

There was risk.  I wanted to be a mother so badly that I was willing to risk loving and losing another child.  A 75% gamble in a positive direction seemed pretty good to me.  But my husband didn’t feel the same way, and I understood that perspective, too.  We’d just gone through hell.

As we asked our final questions and tried to comprehend what this would mean for the future, the genetic counselor added, “Well, with someone else, the chance would be back to 1 in 70,000, but with the two of you it is 1 in 4.”

Dagger in my heart.  My eyebrows furrowed at the thought, Why would she even say something like that at a time like this?  It seemed so insensitive.  “Someone else” was not on the table and never would be.

The next few months, I had some pretty stiff words with God.  He knew that I wanted to be a mother so badly, more than anything else.  I missed the smell of baby head, cooing over him as I changed his diaper, his big blue eyes and edible toes.  I missed my first glimpse of him in the mornings.  I missed him so much.

“Lord,” I wept, “Why are You doing this to me? YOU have given me this strong desire to be a mother, and I am so thankful that I got to be Tage’s mom for eight wonderful months.  But I don’t understand this at all.  How can I ever be a mother with a husband who doesn’t want to risk biological children and doesn’t want to adopt? How are You going to resolve this?  Will I ever feel happy again?”

Molly, “Delight yourself in the Lord, and He will give you the desires of your heart” (Psalm 37:4).

“Yes, Lord, I know that verse.  But what exactly do You mean.  You’ll give me what I desire?  Or You’ll put in me new desires You want me to have?  I don’t know.  I know You know the way You made me, and I want to delight myself in You above all, not in my role as a mother…But I don’t understand….This just seems so cruel.”  I took a deep breath. “…but I know You’re not cruel. Help me.”

Molly, “For I know the plans I have for you…plans to prosper you and not to harm you, plans to give you hope and a future” (Jeremiah 29:11).

“Ugh, I know, God.  I know this is what You say.  Help me to believe it.  I don’t know how you will deal with this desire in me, but I trust that either You will help me to be okay with not having children, or you will take this desire away from me.  I want what You want for me.  I know You love me, and I know Your way is best.  I just really, really don’t understand it now.”

I blew my nose one more time.

I looked at my dog, Marty, lying on the floor beside me.  “Now we wait and see,” I whispered.

Three months later, I met my friend Kara for a glass of wine and sushi.  While shoving California Roll into my mouth, I relayed the information the genetic counselor had told us and of my husband’s desires regarding more children.  “So…that’s that,” I concluded resolvedly.

“I’m so sorry, Mol,” she began.  She paused.  “But I had a dream recently, one of the ones where it feels real.  You just know it.”  I nodded along.  “You were pregnant, Molly, beaming with joy!  I woke up from this dream, and I just knew it was prophetic.  I really believe God told me you will be pregnant one day!”

Kara is not the type to throw prophecies around.  In fact, she had never done so before in the history of our friendship, and she’s not one to say something to make me “feel” better, because really, that would have been cruel.

I wanted to believe her so badly.  I thought about it long after our conversation. But my husband didn’t want biological kids.  Or adopted kids.  I wouldn’t divorce him for this, so clearly, the Lord was going to do something with those three pieces, and I would have to surrender to it.

But the Lord has way more pieces than we ever imagine.

I came across this powerful reminder this week:

“When God promised Abraham that he would become the father of many nations, Abraham believed Him. God had also said, ‘Your descendants will be as numerous as the stars,’ even though such a promise seemed utterly impossible!  And Abraham’s faith did not weaken, even though he knew he was too old to be a father at the age of one hundred and that Sarah, his wife, had never been able to have children.

“Abraham never wavered in believing God’s promise. In fact, his faith grew stronger and in this he brought glory to God.  He was absolutely convinced that God was able to do anything He promised” (Romans 4:18-21).

When God speaks, do we believe Him?  When promises or dreams seem utterly impossible to us, does our faith weaken?  When all the pieces we hold in our hand about the situation don’t fit to construct what we have in our mind, what do we do with them?  When it’s not working the way we thought, do we waver in belief or grow stronger in faith?

Abraham was just a man.  He wanted a child, and so did his wife, probably more than anything else.  For decades, the answer was not “no,” it was “not yet.”  But they didn’t know that, of course.  When God finally said, “Okay, now,” Sarah laughed.  She knew she was too old, and that having a baby would be impossible.

But the pieces God holds make nothing impossible.

In those dark and gray early months of 2015, God already knew what He was going to do with this desire He put in me.  He already knew I was about to go through an unwanted divorce, grieve that, move out of my house, be introduced to a guy named Guy who had experienced similar losses to mine, fall in love with him, move to Kentucky, and marry him in my dad’s backyard on a beautiful fall evening.

And He also knew that in April of 2018, we’d get to see our baby for the first time. 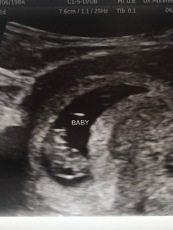 …and Molly was absolutely convinced that God was able to do anything He promised.

“For I know the plans I have for you,” declares the Lord, “plans to prosper you and not to harm you, plans to give you hope and a future.”  Jeremiah 29:11

“Delight yourself in the Lord, and He will give you the desires of your heart.”  Psalm 37:4

“I will restore to you the years that the locusts have eaten.”  Joel 2:25